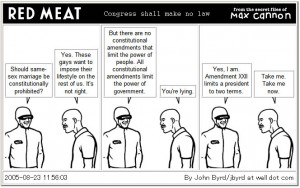 Thanks to Satori for the link to write your own comic strip.

As far as I could tell, it was a thoroughly normal wedding. People dabbed tears from the corners of their eyes as the couple walked down the aisle. The brother-in-law made an off-color toast. Family photos were taken in the garden. The icing on the wedding cake was buttercream. Yours truly played the processional and recessional, on guitar: Embraceable You, East of the Sun, At Last and You Are the Sunshine Of My Life.

Stacey Camillo and Alex (Cynthia) Alexander were married on August 14, 2005 in a quiet ceremony in Ogunquit, Maine. Stacy and Alex are, of course, women — although some of us referred to them both as brides, they themselves preferred to be called the gride and the broom.

History is not kind to bigots. A hundred and twenty years ago, Richard H. Colfax and George Fitzhugh wrote ornate, collegiate-sounding essays on the unfitness of the black man to own himself. Rep. Seaborn Roddenberry proposed a Constitutional amendment in 1912 prohibiting the marriage of white people to black people. Roddenberry liked expensive words: his amendment would “exterminate now this debasing, ultrademoralizing, un-American and inhuman leprosy.”

Tell me honestly: do you know anyone under 25 who wants to ban gay marriage?

Tell me honestly: which side of history do you want to be on?

Time is on our side. Literally and figuratively, the movement to delegitimize same-sex marriage is dying, and it’s dying of natural causes. Within a generation, the spirit of humanity will prevail over bigotry and fear.

Here’s to the day when a gay wedding is no longer a political act.

A side note: I had the door held open for me at the Maine Street Bar in downtown Ogunquit. The fellows there are generally polite, except for the guy who demanded to kiss me.

“The American musical is dead,” claims Michael John laChiusa. While you and I may not agree, his taxonomy of faux, parody, real, and jukebox musicals is useful to us writer types.