Rehearsals are great fun because I can strike up a great deal of trouble without saying a damned word. The key to being truly obnoxious is using the standard actor library of facial expressions. As we’re rehearsing Valerie’s new play, I start a conversation with Allison, who I’ve just met. Allison is a rangy, cordial, easygoing Texas actress who produces her own theater and does occasional stage reads. As I chat her up, she sort of reaches behind my head and tugs on a tuft of my hair.

“What, is something wrong with my hair?” I ask.

“Oh, I think you have stuff in it,” says Allison.

“Actually, it’s not the product,” says Allison. “Your hair is sticking up in back.”

“This look is okay for really young men,” she contemplated, tugging on the back of my head. “But for older men? it’s not…” She trailed off.

At this point, I turned and gave her look #43. Now look #43, for those of you who are not professional actors, is a mix of sadness, offense and surprise.

Allison proceeded to turn a beautiful shade of mauve and remained thus for several minutes at least, until I changed the topic of conversation to balls. Pool balls. It was a plot point in the play. Never mind. So later, the cast is hanging out around the piano and I’m playing every 1980s pop song ever written and Allison comes up. “Wow, you have an astounding hidden ability with the piano,”she says.

Conversationally, she asks, ?Do you have any other hidden abilities??

I give her look #76. This is the look that Riff Raff wore around during most of The Rocky Horror Show, kind of a lecherous lustful dangerous evil grimace thing. Allison cackles and gives me a light swat on the butt.

“I’m not even sure what that look means,” I say.

Allison says, “Yeah! Uh, did I just touch your butt?”

Allison says, “I don?t even know you that well and I just touched your butt. Oh my God.”

Seamless transition to #43b. I say, “Not just touched. Grabbed my butt.”

She?s back to mauve again. “I did not grab your butt!”

I break out of #43b long enough to say, “That, right there, was a full-on butt grab you did. Big old handful of my very own personal butt.” Back into #43b. She just starts cackling again, so I go over to Tom, the director, and say, “Do something about Alison!”

“She grabbed my butt and called me old!” I say.

“What do you want me to do about it?” says Tom.

I collapse into his arms, break into #76 and holler, “I want you to grab my butt and call me old too!” I love rehearsals.

Down three flights of stairs, up two, jump on the subway; dammit it’s the wrong one! An unwanted side trip to seething Shibuya Station, and I can’t cross to the eastbound Hanzomon line without exiting, down three flights of stairs, up one, across the courtyard, down four flights, up two, caught the subway ten stops to a flat escalator snaking up a low hill to the limousine bus (same as a regular bus, still) to Narita Airport, where I flash a passport and hustle through the Red Carpet Club (returning someone’s lost passport on the way) to United 852 (exit row) to SFO to walk through immigration control then twenty percent tip to a taxi home.

Eight thousand, six hundred, thirty-two miles, three days, thousands of dollars. Is what I have to say so damned important?

Commute today: the wife drives me (in the new Prius) to the airport, and it’s ten minutes in the red-carpet lounge for a mini-bagel and coffee — seat 1C to LAX, a shuttle to the Tom Bradley International Terminal, through customs, into the ANA first-class suite for more coffee, then eleven sunshine-filled hours to Tokyo, then a bus takes us to the main terminal, through immigration, a limousine bus (it’s just a regular bus, only more expensive) to Akasaka, up the hill to Villa Fontaine Roppongi. 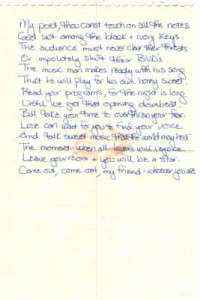 And as usual, I have the pictures to prove I was there.