Post-wedding party last night. Myself, my wife, and ten drunken lesbians. There was heavy whipping cream1 and gratuitous breast fondling.2 I love you, San Francisco!

1In the dessert, actually.
2My own breasts, mostly. 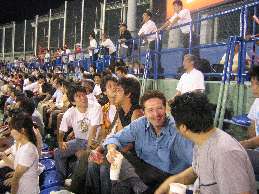 The Japanese are nuts about baseball and it’s still a sport for the masses here. Hirasaki-san has kindly purchased tickets for a Japanese major league baseball game. The air is humid but picking up here at Jingu Stadium.

Now the teams playing tonight are the Yakult Swallows versus the Hiroshima Carp. Now you might think it would be difficult, nay impossible, to do a baseball cheer either for carp, or for swallows. You would be mistaken.

And I know what you’re thinking about calling an entire baseball team the Swallows, and that’s just not right, so put that out of your head. Let’s say you’re rooting for the Swallows and you want to show your team support. What do you do? You take out your big green umbrella, of course, and you bounce it up and down, while singing the team song, Tokyo Ondo, at the bottom of the seventh.

That’s what you do, if you’re a fan of the Swallows. 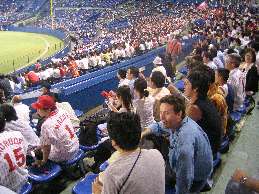 The seventh inning stretch comes up. The Carp contingent doesn’t sing “Take Me Out to the Ball Game.” Instead, the Carp fans inflate all these rubber balloons (see, you’re back thinking about the Swallows again, and I told you to stop thinking like that) and we sing the team song and then we let the balloons go and they float into the sky just like… well… here’s a QuickTime movie.

A smoke-filled restaurant somewhere in Omotesando. Jars of sake and imojochu decorate one wall. I keep hearing this Romanian song all over Tokyo — the US will probably be inundated with it shortly. So I’m hanging out with Haba-san and Oikawa-san, enhancing the jet lag with Kirin. I ask about the Kyushu skewers that we’re munching on. “Cow organs,” Haba-san tells me. Haba-san’s girlfriend, Kumiko, arrives, and after a few more beers we initiate the time-honored cultural exchange program of teaching one another dirty words.

“No. You shithead,” I pronounce.

“You shit, head. You, shit head. You. Shit-head. You shithead,” Kumiko said, with conviction. Then, pointing at Haba-san, she says, “You shithead.”

Kumiko pauses, and thinks. “What is shithead?” 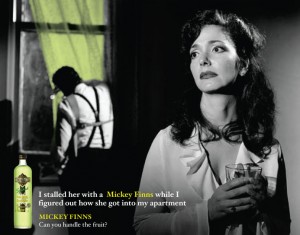 That’s my wife. Mickey Finns is a Russian schnapps that’s trying to expand distribution into Ireland. That’s me in the background. I don’t believe that I am the fruit in question.