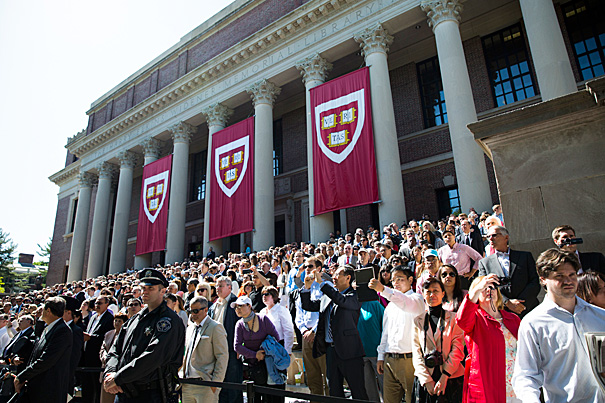 As I do every year, I want to congratulate the current class year on completing your Harvard degree. Your Harvard degree provides you access to important advantages and benefits as you go through life. About two months after you graduate, the bursar’s office will be sending you an alumni card that looks like this.

Make sure not to lose this card.

I am going to give you a lot of information on the benefits and rewards you receive by being a Harvard graduate. Normally I have handouts at this point, but there was a problem with printing, so just take notes on your iPhones and things. There’s a web site with all this information on it. Before the end of the presentation, I will… try to get that web site address for you.

Harvard alumni get free upgrades from economy to first class on any airline trip within the lower 48 states. This is a really valuable benefit, so make sure to use the Harvard discount code when booking.

When you enter a boardroom during a board meeting, all people who graduated from non-Ivy League schools must stand at attention until you are seated.

You receive 15% off any Disney multi-park pass, Tuesday through Thursday, holidays excepted.

The Band-Aid corporation provides you free Band-Aids in our own computer matched skin tone. Click on the “Harvard” link on www.band-aid.com .

At most four-star hotels, when you check in, you will receive a special bar of soap that deep cleans without drying out the skin. This should happen automatically; you won’t need your card for this.

You get a special dispensation that allows you to drive up to 75 mph in 55 zones. If a police officer pulls you over, present your alumni card, and the officer will scan the barcode into a computer. At this point, you pay the police officer $1, and then you should be permitted to leave. If he detains you at this point, make sure to contact the bursar’s office.

Some of you own apartments and condos. If one of your tenants has just been married, you may at your option sleep with the wife or the husband or both during the first night of their marriage. But in fairness I must tell you, times are changing. Since 2005 this has become frowned upon and rarely happens anymore. So, I am not going to tell you what to do here, but try to use good judgement, okay?

Also, Harvard alumni have seniority when a group is deciding who will lead the Pledge of Allegiance.

For a while we got a dollar off any KFC $5 Fill Up Meal, but I think that expired. Does anyone know if that expired?

Other than that, I can’t think of anything. So, that’s it… welcome to the society of educated men and women.

GIF is pronounced with a hard g, contrary to the claims of its “creator”, Steve Wilhite.

Steve Wilhite only “created” the GIF format to the extent he didn’t copy it from previous creators. At the time he wrote it, he worked for CompuServe.  The GIF format contains the concept of global vs. local palettes, and it contains origin information for frame within a frame. That’s really the extent of the novelty in the GIF format. All of the actual color data is stored within a Lempel-Ziv-Welch compressed table. Wilhite copied the LZW algorithm direct from this seminal 1984 paper and hence from the Unix compress program. I know this, because as a Harvard undergrad struggling through CS175, I implemented a converter between Harvard’s image format and GIF.  My program used the guts of Unix compress, along with that paper, to encode and decode GIF images.

In the mid 1990s, Unisys used threats to try to shake down a few companies over its claimed ownership of the LZW algorithm.  This is after one of the authors published the algorithm publicly and went to work for another company.  As is usually the case in high tech, Unisys’s attempt to screw other companies backfired.

In essence, Wilhite’s and CompuServe’s only practical novelty was simply stamping a copyright notice on the front of some existing technology that they didn’t invent.

So the best we can do is to call it as we would any American acronym, by taking the first sounds of the words that comprise the object. Say GIF, think Graphics Interchange Format.

In 1477, Margery Brews wrote a letter to her fiancé, John Paston. Her handwriting is very fine and ornate. She wrote the following: “If you love me, as I truly believe you do, you will not leave me… Because even if you did not have half the wealth that you do, and I had to undertake the greatest toil that any woman alive should, I would not forsake you. And if you command me to remain faithful wherever I go, I will indeed do everything in my power to love you and no one else ever. Even if my friends say I am acting wrongly, they will not prevent me from so doing. My heart commands me to love you truly above all earthly things for evermore. And however angry they may be, I trust it shall be better in time to come.”

And this, we think, is the first ever love letter.

There are other, parallel forms of e-mail as well. In the mid 1980s, Tom Jennings wrote a BBS system and a protocol document called FidoNet. At the time, BBS systems were still quite popular. They required a dedicated computer that answered calls on a dedicated phone line. In particular, FidoNet required that compatible BBS software obeyed what was called Zone Mail Hour, or ZMH, which was a period during which the BBS was expected to send and receive EchoMail to and from other BBSes, typically by calling them directly. Because this wasn’t always practicable, FidoNet had a basic routing capability that permitted you to route messages to through other nodes to their destination nodes.

The early 1990’s explosion of FidoNet was predicated on the existence of cheaper, faster modems as well as cheaper, faster personal PCs. By 1996, while schools and universities were using Internet based email to send messages, the FidoNet community contained almost 40,000 nodes.

As the Internet, and the World Wide Web in particular, exploded in popularity in the early 1990s, FidoNet rapidly died off. Internet e-mail benefited from an “always on” design in which central servers could theoretically speak with dozens of e-mailers at the same moment. E-mail delivery on the Internet was nearly instantaneous. FidoNet servers could typically speak to only one or two users at any given moment, and EchoMail could be delayed up to a day.

Now you would think, given the Internet’s clear advantages on e-mail, that FidoNet should be well dead by now. But as you can see from FidoNet’s most recent nodelist as of this writing, there are several hundred nodes still operating and still interchanging EchoMail with one another.

Some people think that the automobile destroyed the horse and carriage industry.  These people have never been stuck behind an Amish buggy.

Ten decades in the future, people will take a break from augmented reality in order to write an e-mail, just like their grandparents did. Because e-mail is so quaint, and so old-fashioned, and so romantic.

Why is this the case? Why are people still using this outdated and quaint form of communication with one another?

Perhaps for the same reason that amateur ham operators still try to talk across the Atlantic on longwave radio, when international phone calls are cheap and reliable.

Perhaps for the same reason that vinyl records have seen a resurgence in manufacturing, even though compact discs have significantly better signal-to-noise ratios.

And perhaps for the same reason that handwritten love letters still travel through the post office, a thousand million times slower than an e-mail might.

E-mail (and programs that send e-mail) will be with our race centuries after you and I die, because it has sculpted and defined the lives of countless millions; and we are a nostalgic and romantic race of beings, much more so than being a technologically efficient race.