Sega’s Halloween costume contest was extremely half-assed this year. For first prize, I won a Kit Kat and a Miss Piggy Pez dispenser. I suppose it was worth putting on the high heels and plether in order to see the faces of all the people in Accounting.

Sega’s Halloween costume contest was extremely half-assed this year. For first prize, I got a Kit Kat and a Miss Piggy Pez dispenser. I suppose it was worth putting on the high heels and plether in order to see the faces of all the people in Accounting.

Floating through corridors in Narita International Airport. Blue-eyed models beam down at me from the rotating advertisements that are worded entirely in English. The limousine bus drives on the left side of the road. The sky is a salty blue but the air is thick and pregnant with moisture. The mottled green fields are geometric interlocking rice paddies, decorated with small red tractors. Gradually, the fields become suburbs, and the suburbs become Chiba City, millions upon millions of tiny apartments heaped delicately upon each other, washing and futons hanging from the balconies. Tokyo Disneyland, containing Space Mountain and Cinderella’s Palace, and then bridges and bridges and bridges. My body says it’s midnight but the setting sun disagrees. Now, the heart of downtown: the bus traverses arcs of raised roadways: vertigo times jet lag. Man made objects only, to the horizon, in every direction, even as we sail over the Tamagawa River.

Day time: dual-language engineering meetings, thirty-minute politeness conversations about nothing of consequence. Night time: pricey lunches on the corporate card, beer and sake, complicated systematized dinners (“no, first, you dip the crab in the shoyu, then add the sesame”) with decorative girls and wisened men.

Everything is so terribly, dangerously fast here. I remember you holding me and singing love songs from forty years ago. I remember falling asleep and dreaming. After that, everything has been a blur. I am in the center of the world’s largest city, surrounded entirely by well-meaning people and alcohol and money and rain-refracting neon, and I’m lonely for you. Yes, I’m a spoiled self-centered bastard, but the truth is the truth.

Very productive rehearsal tonight for Romance in D at the Bus Barn. We laughed a lot and had a great time. I had almost forgotten what it was like to have a good time working on a theatrical production.

So, the official word is that Romance in D will be fun and cute. If you’re around for the holidays, do check out the show.

In some way, reading Achewood made me feel like I could use comics as a legitimate creative form expressing down and up and sideways moods as long as people knew it was going to be unusual and not always a laugh line in the third panel.

Practically every artist to ever hold a pen and draw a three-panel has talked about a similar personal drive to “legitimize” the form, as though the form needed further validation. I have wrestled recently with several different forms of self-expression… bloggish, music, video, sketch writing, play writing, games and non-fiction… and I believe that all forms come with their own capabilities and restrictions. For example, I feel that the blog form is dissociative by nature. You have no idea when the reader will lose or gain interest — they might click on a random link, thus punching in or out of your carefully crafted linear writing at any moment. This aspect of the form can be considered a limitation, or it can be used to the author’s benefit.

There’s only so much you can do in 3 panels. There is a huge body of cultural expectation that is set up to prepare you for the dissociative punchline in the 3rd panel. Foreign people coming to the US who read comic strips in the paper often complain that the strips don’t make any sense or aren’t funny. What we’ve got here is a failure to communicate. The form does not embody the message.

The Achewood stuff supports this argument… there are four to twelve panels in all the strips, and while not all of them are funny, each one of them contains the equivalent of a “beat” in a screenplay, enough to establish a character fact, or a moment of revelation about a character.

I compressed a bunch of amusing ideas which I could have spread over
about 30+ strips into 12 dense packages, with a punchline in each panel. And towards the end, I steered it to a more and more down mood until it had I thought a rather sad ending.

The kicker that made the Season One sequence work was Alberto’s analysis about the fanatic devotion to the A’s. This was the truth at the center of the bullshit. All really funny material contains a revelation of truth at its core.

You told me once, when I was musically constipated, to “write about something that mattered to me.” April 22 was directly inspired by that comment. However your directive applies to all media, not just four chord rock.

I’m suspicious of popularity and the formulas one can use to achieve it. I need to feel like I can express more facets and moods than just the funny stuff.

You are laboring under the assumption that “me = my art“. Consider johnbyrd.org as a counterexample. Several people — some of whom ought to know better — have decided that I’m a womanizing bisexual from the stuff I post on there. I find this alternately amusing and annoying. Anyone trying to get a good idea of what I’m really like, by reading my web site, will certainly fail to do so. This behavior is by design, because I feel the medium itself cannot handle the strain of true self expression. A longer and more intimate medium — an album, or a play, or a short story — would be required to do that with any degree of success. 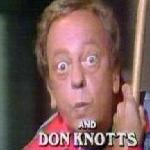 It is always necessary to express more facets than funny, even when writing gags. But a proper funny itself expresses far more facets than just funny. I am rehearsing now on a romantic comedy called Romance in D now with Alex A., who you remember from Rainmaker. My character is a metrosexual musician type who has trouble expressing himself verbally. This is a big stretch for me but I decided to accept the part anyway. So there is a big scene I’ll ruin for you, where I kiss the love interest and she confesses, “I thought you were gay.” Now there are two ways to play the reaction to the confession. The first is Three’s Company style with Don Knotts-ish googling… “Whuh! Whuh! Whuy didja think I’s gay, huh?!” with laugh track etc. The second is to play the reaction as honestly as possible… upset, hurt, insulted, surprised. Ironically the first method is simply annoying while the second method is extraordinarily funny. Truth in humor.

Once that’s been established that people will take me as I am, I can more easily give people what they want. That’s about the size of my relationship to art and the world I think.

Auditioning is not acting. Read Michael Shurtleff’s “Audition” for a fascinating intro to the process. One of the agonies of giving good aud is creating believable characters instantly or near instantly, given no prep and no deep understanding of the script. The answer to this is to use yourself and inject your own personal history into the character, and to have faith that your personal emotions will tell you what to do. Anyone can act but it takes a real actor to not act.

Do not fear rejection. Sprinkle it on your cornflakes for breakfast. All commercial artists drink 24 oz. of rejection before a two-mile morning run. q.v. G. Sanger’s Daily Dedication for Artists. Also, do not limit yourself to requiring the creative output to be a reflection of the creator.

… and back to Tokyo the week after next.

For those of you infected with the Maiahi virus from my post a few weeks ago, the only cure is more Maiahi.