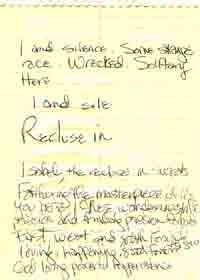 This is one of the poems that Isabel Fox wrote on stage in the current production of Romance in D. Isabel Fox was originally dreamed up by James Sherman, but Alex A. portrayed Isabel by writing these words while on stage. So where did these words come from?

Update: Jeanie Forte, Palo Alto Weekly: “Break away from the usual ‘Nutcracker’ to enjoy this heartwarming play… Byrd’s mastery of subtle looks and comic timing add depth to the character.” Keith Kreitman, Oakland Tribune: “This ain’t a Shakespeare comedy but it’s a lot of 21st-century fun… As Charles, Byrd is an actor of much talent, who can range from the dark nature of Dracula to comic fluff like this with remarkable detail. His delayed-reaction timing here is worthy of movieland’s Jack Lemmon.” My mother: “I thought it was very good.” 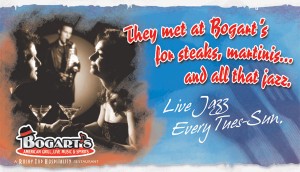 As you know, I attended Harvard for many, many years. During my studies at Harvard, I took many, many excellent classes in drama. I will now save you the time and expense of attending a prestigious Ivy League university, which in this case, is Harvard. I have successfully summarized all the knowledge that can be gleaned from those time consuming, expensive drama courses at Harvard, in my newly-minted Theory of Drama, which I refer to as the Fighting-Fucking Theory of Drama.

The central axiom of my Fighting-Fucking Theory of Drama is reflexive simplicity itself:

1. There is fighting or fucking in drama.

There you have it. Once the title of my Fighting-Fucking Theory of Drama is understood, no further study is required. The name of the theory is the central axiom of the theory. This is a great convenience for those people who have difficulty remembering such things. It also helps me differentiate this theory from numerous other theories that I have created.

Very well: in any interesting scene, there is, at a minimum, either fighting or fucking. Here is the contrapositive restatement of the axiom:

This is simply the first axiom standing on its head, in order to attract attention, so to speak. If we know that “if A then B” is true, and we know that B is not true, then we may assume that A is not true.

So many eager young writers, armed with an illegal copy of Final Draft and drunk with the panorama of creative possibilities, ignore axiom 1a. They proceed to crank out voluminous quantities of self-indulgent unlikely dialogue. If you, as a writer or an actor, keep axiom 1a firmly ensconced in your mind during your development phase, you will be far ahead of the pack.

If you don’t understand the “if A then B” Boolean math, simply continue reading as though you do. The math is correct. I went to Harvard.

Now we will move on to axiom 2, which is much like axiom 1, only different:

2. Fighting and fucking together is more dramatic than either fighting or fucking alone.

If you can construct a scene where there is both a sexual dynamic plus a set of conflicting goals, you get a dramatic double multiplier whammy: the sex interest times the drive of the conflicting characters. This axiom provides a straightforward fix for any scene that isn’t sufficiently interesting. If a love scene is boring — add conflict. If a conflict scene is boring — add love.

At this point, I am ready to accept your questions… Yes?

So, um, this theory of yours… Isn’t it about sex and violence?

No, no. I am speaking metaphorically. Metaphorical fighting, metaphorical fucking. Sex and violence need not — and in most cases, ought not — be overt in order to have dramatic impact. But the fighting or fucking must be expressed or implied in a scene, else no one will care about the scene.

Isn’t that an extremely loosey-goosey definition of fighting or fucking?

I am an artist and a writer. I went to Harvard. I am permitted metaphorical flexibility.

Nothing. Look, your idea is too sex-obsessed. There’s a whole bunch of drama that has nothing to do with sex.

Bwah hah hah! That’s about practically nothing but fucking. Mrs. Bennet wants her daughter Jane to fuck Bingley, but Darcy convinces Bingley not to fuck Jane. At the same time, Wickham is trying to fuck Jane’s sister Elizabeth, and Elizabeth is thinking about fucking Wickham. But Darcy tells Elizabeth that he wants to fuck her, but she refuses to. Then Mr. Collins tries to fuck Elizabeth and he also fails, so instead he fucks Elizabeth’s best friend Charlotte. Elizabeth finds out that another sister, Lydia, has run off with Wickham and is secretly fucking him somewhere in London. Bingley returns and fucks Jane. Lady Catherine de Bourgh shows up and asks Elizabeth whether she is fucking Darcy — Elizabeth says no. Hearing this news, Darcy returns to Elizabeth, and they —

All right, all right, I get the idea! Of course classic romances contained veiled sex references —

Modern ones too. I’m in Romance in D, opening this weekend. Follows the Fighting-Fucking Theory of Drama to the letter. And it’s turned out to be a really entertaining comedy. Playing at the Bus Barn in Los Altos from November 17 through December 17, if you love romance, laughter, and happiness, ROMANCE IN D is a must-see!

That was the least subtle segue I’ve ever seen. So you’re basically advocating more sex in the media?

No, that’s the last thing we need. Sex without conflict occurs all the time in modern entertainment — billboards, music videos, Las Vegas, stadium rock. But these entertainment forms can never, ever become permanent or significant. They are designed to be ignored. They are designed to be background noise. The audience can punch in or out at any time. There are no protagonists, no objectives, and no obstacles to be overcome. Sex without conflict is the cultural equivalent of wallpaper. It is designed to be forgotten and replaced by this time next week. Sex multiplied by conflict, however, is endlessly entertaining.

But what about classic dramas in general? Political dramas and the like? There’s no sex in Julius Caesar.

Overtly, there is no sex in Julius Caesar, but imagine the modern twist that a sexual subtext might provide to those thick slabs of iambic pentameter…

Okay, you’re really bullshitting now. There’s no sex implied in the relationship between any of the conspirators in Julius Caesar…

Why can’t there be? This is Rome after all. Traditional interpretations of this play frame Cassius and Marc Antony as purely two-dimensional baddies. Why not make the more interesting choice?

As far as I can tell, your idea about sex and conflict —

The Fighting-Fucking Theory of Drama, please.

Um, yeah, that — all you really seem to be saying is that there ought to be sex or conflict in a scene? That seems, um, rather obvious? Aren’t you just repeating what all creative writing books say about scene construction?

So, those Raiders, man… they really started to suck when they lost Gruden, eh?

Please check out EDISON AND THE ELECTRIC CHAIR on The History Channel this Saturday (that’s today) at 1:00 PM. It’s probably on some other times as well per your local listings. One warning – I haven’t actually seen this thing, so for all I know my scenes are on a cutting room floor somewhere. Normally I would try to pre-screen for y’all, but we did the shoot about a year ago, and I don’t remember it very well… BUT, I do remember wearing bloomers! And getting killed with an ax! And making out with some guy I met five minutes before the cameras started rolling! And, if that’s not entertainment – I don’t know what is!

I received an e-mail today from Mudd and Nurn, the parents of my wife. They are round, pleasant, New England Jewish types. They are currently vacationing in the Middle East: Haifa, Tiberias, Jerusalem, Amman, Petra, Tel Aviv. Here’s the e-mail:

Hope I remember the email addrs OK. The only one I’m really sure of is jwb’s…

I just saw the CNN info about tonite’s terrorist attacks in Amman, and not to worry about us — we checked out of one of those hotels (yikes) 2 nites ago, and we are now safe (??) in Tel Aviv. Flying home as planned early Saturday.

Two responses come to mind and I can’t decide which one to send. Please post a comment with your advice.

1. I’m really glad that you have not let generic fear or uncertainty limit your interest in travelling the world and meeting new people. I know that by travelling and interacting with the cultures of the world, you are spreading the sincerity and openness of real America. We love you. Enjoy the rest of your vacation, take many photos, don’t fret, and come home soon.

2. Christ in a fucking sidecar! You’re American, you’re Jewish and you wear shorts! You might as well have “CAP ME OR KIDNAP ME” tattooed on your foreheads in Arabic! Why the fuck are you still in there! You’re my family now so quit fucking around! Get on a fucking plane to Boston now! Fuck!