Decent all-women plays are scarce. I wrote “The Knitting Circle” as a short bravura piece for six talented actresses. My intention was to let women conduct stage combat and operatic violence, which is, even in our supposedly enlightened age, reserved almost entirely for male actors. Additionally, I hoped that the characters and their conflicts would be more rounded than the agonizingly common slut/virgin female stereotypes.

The only really good all-female drama I have ever read is “The House of Bernarda Alba” by Federico Garc?a Lorca. (The play is readable in the original, even for us polyglot dummies who studied Spanish for only a few years.) Thus I have lifted Lorca’s structure of a tragic matriarch, torn by anti-male sentiment, grasping for control of her rebellious brood.

Here’s a lithograph of the original picture, “Une Affaire d’honneur,” by Emile Bayard, that inspired the script:

And here’s the opening tableau from the staged read: 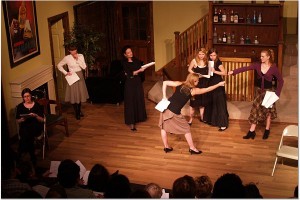 My new short play, “The Knitting Circle,” will receive a staged read at STAGES Theatre on March 22, 2008 at 3:00 p.m. Four other short plays will be presented as well. Admission is $5.

The staged read of “The Knitting Circle” is being directed by Jenni Dillon, and it will include the following talented actresses:

Occasionally people ask how I “see” music. I do tend to perceive music visually, as a set of continually changing spatial relationships: with distance along axes representing pitch, time and tonal relativity. This technology gives some idea… though I would like there to be a third dimension of visual representation (toward you the viewer) which represents tension and release, i.e. gravity, through distance from the tonic… at the D minor the notes are at the default screen distance from you, and as they move around the circle of fifths they move closer or farther from you.