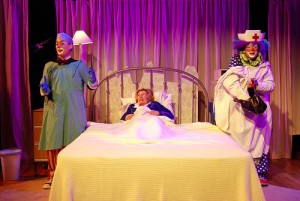 Well, the East Bay Express liked it, and they panned the other show it was paired with. You got two weeks left; check it out.

A month ago, my friend Dean told me: “I’m music-directing a show over at the Maverick in June. It’s called ‘Burlesque of Bond.’ It’s got all the theme songs from all the James Bond movies in it. Wanna play guitar for it?”

When I told my wife, she asked, “You’re going to be part of a burlesque? Isn’t that a lot of women dancing around without clothes?”

I looked up the word “burlesque” in our big dictionary. It said: “an artistic composition, esp. literary or dramatic, that, for the sake of laughter, vulgarizes lofty material or treats ordinary material with mock dignity.”

“No nude women dancing around?” she asked.

Fast forward to two days before the show opens. Set construction took longer than anticipated, and so this is the first time that we’ve been able to rehearse the band and the stage act at the same time. Bass, drums, and rhythm guitar are all perched on metal scaffolding to the right of the stage. Dean plays keyboards and the familiar sampled sounds roll forth. I’m strumming the guitar and trying to sound 80s as I sing: “Meeeting yew… with a vyooo… tew a killll…”, wocka wocka wocka wocka.

And I look over to my right, and there are three very young, very hot women on stage. They proceed to take off their baby-T’s and dance around in pasties and G-strings.

At this point, memory becomes befogged.

When I came to, I asked Dean, “Dean, how come you didn’t tell me before that this was essentially a strip show?”

Dean said, “I did tell you. Burlesque of Bond. That’s the name. That’s burlesque,” he nodded.

“No,” I mumbled. “You didn’t. I figured, burlesque, like an artistic composition, esp. literary or dramatic, that, for the sake of laughter, vulgarizes lofty material or treats ordinary material with mock dignity.”

Dean looked at me. “What the hell are you talking about?”

“Stripping!” I said. “This is a strip show! There’s stripping! In this show!”

“You got a problem with that?” said Dean patiently.