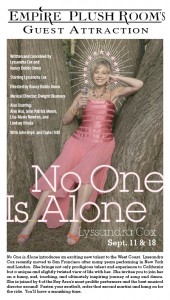 A few braggish items, and an upcoming show. First, Ambassador’s Day got picked up at the 2006 Mill Valley Film Festival. This is actually kind of a big deal, as a bunch of movie-makers got their break here. More info on show times when I get them. Second, Romance in D just won a 2006 Silicon Valley Theatre Award for Standout Comedy Production. Thanks, Susannah!

Those of you who live near San Francisco: come see me at the Plush Room as I play strings for Lyssandra Cox. I’m working with piano god Dwight Okamura on the music. Shows are September 11 and 18 at 8 p.m. Even though it’s Monday night, tickets for the unwashed masses are $20, but I might be able to sneak you in for love.

Inverness, California. We’re at Manka’s Inverness Lodge, in the master cabin. Fill lights glaze the ceiling in a warm brown glow, and an epic blaze shouts at us from the ornate fireplace. The bathroom is next door, replete with cuddly towels and lavender-chamomile soaps. Through the door, we can see the claw-footed bathtub, filled with professionally frothy suds. Folks from marketing huddle around it, debating lighting angles. “She’s holding the champagne,” says a marketroid. “She’s holding the champagne and sitting here in the tub. It’s informal. Can’t look posed. Gotta have a mood. Gotta be real. Can you make those bubbles a little lower? Where’s our talent?”

Lolly nervously looks at the bubbles through the doorway. She shifts a bit in the makeup chair. Her half-blonde hair cascades in ideal waves around her face. She’s thin and gorgeous.

Aurore has laid out an array of powders, bases, brushes, salves, creams, towels, and papers on the oak desk. Aurore dapples bits of foundation and color around Lolly’s eyes. Aurore has a Left-Bank accent and an unassuming demeanor, with imperfect skin and big moo-cow brown eyes. She learned her craft on the Paris runways.

Aurore dotted Lolly and stood back. “It is nice like that, yes? No?”

Lolly peered into a compact. “My eyes. I think you’ve made them pop too much. I look white.”

I picked the pecans off a huge bear claw, dipped them in my coffee.

Aurore fluttered. “Oh I am so sorry, my. Again?”

Ten minutes later, more powder, more base. Lolly checks the mirror again. “Um. You see, if you look here, under my eyes. You’re trying. I know you’re trying. Can you see what I’m talking about?”

Aurore twitches. “Oh my. Yes. We can most definitely.”

I overhear an argument around the claw-footed bathtub. “Because, goddammit! If we do the shot with all four of ’em toasting, it’ll be just like every other goddamn champagne advertisement out there! Been done a thousand goddamn times! We need to stand out! And I hired you to be creative! To think out of the box!”

A tuft of brown hair has fallen out of Aurore’s tight twist, and she is sweating. Lolly twists in the makeup chair. In the bathroom someone barks about market segmentation and the thirty-something psychographic.

Aurore blinks at Lolly and brushes her hair out of her eyes. “Perhaps, this is good? Perhaps I have done another mistake? Is this what you want?” Aurore flashes a pleading look at me.

Lolly’s face is a thick haze of peach and iridescent glaze. A fermata of concern is perched on the center of Lolly’s forehead. She looks at me fearfully and asks, “How do I look?”

I peg her dead-on with look number 17 (masterful diabolical confidence) and I say:

“You. Are. Fucking. Gorgeous.”

Every single man except me, that is. I take Aurore outside and play some Kyo on guitar with her.