There exist many variants on the basic rules of chess. Many of these variants introduce a larger board or new pieces or movement rules in order to make the game more complex. Personally, I have a hard time keeping straight the additional rules of the variants, and so they seem less fun to me. In the words of Trip Hawkins, great games are simple, hot and deep.

Cathouse is my contribution to the world of chess variants. In Cathouse, many queens scratch at one another to gain the attention of the king.

The only valid pieces in Cathouse are pawns, queens, and kings. Initial setup for the Cathouse board is as follows: 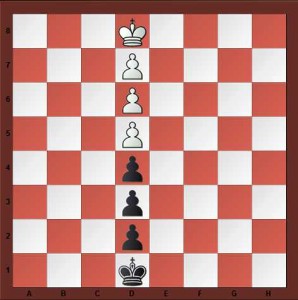 In the initial setup, your pieces are placed on the opponent’s side of the board. You have your king on the eighth rank, with pawns on the fifth, sixth and seventh rank.

When a pawn reaches the eighth rank, it is immediately exchanged for a queen. This means that each player may theoretically promote up to three queens on the board. (Pawns may only promote to queens.) If you don’t have so many queens laying around with your chess board, just turns your rooks onto their heads and pretend they’re queens.

Queens move as in FIDE chess: they slide along rows, columns or diagonals in rays until they are stopped by a piece of their own color, or until they capture an opposing piece.

The game ends according to FIDE chess rules. Checkmate, stalemate, draw, and three-move repetition endings are all possible.

For a piece layout this simple, the game is surprisingly well-balanced. Computer analysis suggests that white has an opening advantage of only about half a pawn, the same as in traditional FIDE chess. Each player must try to generate their own queens while simultaneously preventing the opponent from doing so. Space control and tempo seem to be key in Cathouse.

View all posts by jbyrd